The Devonshire Road Home Ed group meets once a month for various kinds of nature study. During 2010 we’ve been working on documentation of the site, using a range of eclectic photographic techniques brought by the artist, Ky Lewis.

For the solargraphy project 2010, children made pinhole cameras out of used plastic film canisters, loaded them with Ilford BW expired photographic paper and fixed them to trees and other objects around the site, pointing approximately south. The project is for a full year to allow the children to see the rise and fall of the suns path across the sky throughout the year. The exposures we have so far done have been for an approximate period of four to eight weeks each but some of the cameras have been left and the exposures will be for six months. (Photo by Ky Lewis, placed by Leo) 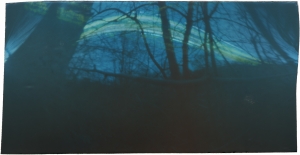 The cameras were left in position for several weeks. During this time an impression forms of the scene the camera is exposed to, in which the track of the sun is prominent as it climbs higher in the sky each day. This literal drawing that the sun makes on the paper gives the terms solargraphy. (Photo by Ky Lewis, placed by Reuben)

The exposed photographic papers are removed in the dark and the images are finally captured by scanning on a flatbed scanner -after the image is captured it is then inverted in a computer program such as Photoshop to a positive image which is often highly coloured. This reveals a latent image that is not usually visible. The colour comes from the appearance of finely divided metallic silver growing on the silver halide grains. The original image is buff in colour but it can be sepia or a warm brown as these grains increase in size. So the resulting images you have are negative and positive.

Effects of handling, water damage and disturbance add fortuitous elements to each exposure. These unexpected effects can be wonderful and often add to the images beauty.

A forthcoming Blurb book will bring the solargraphs together with botanical Lumen prints, pinhole photographs of the bee project, and other documents, in a record  of the Reserve through the seasons, and changes around the proposed new building project.

With thanks to Ky Lewis, Grant Smith and the students of the Devonshire Road Home Education Group